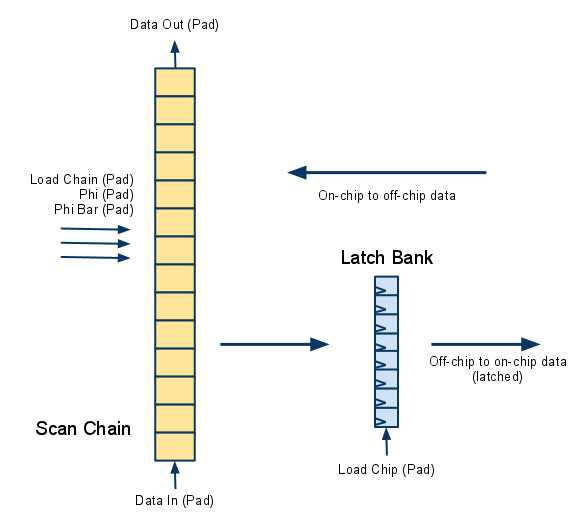 This is a scan based serial communication block designed to safely and easily move data onto and off of a chip with a minimal number of pins. Performance is not a priority, however, we have found it to be sufficiently fast most any student project. It has been used, successfully, on many tapeouts.

Included is an on-chip synthesizble scan block and an off-chip testbench to interact with it.

The on-chip scan block has six pad signals that go off-chip, and a configurable number of on-chip data input and output signals. Data signals from on-chip, going off-chip, can be latched into the scan chain and scanned out. Data signals going from off-chip to on-chip can be scanned into the chip, then stored into a latch that drives the output of the module. The buffering latch prevents data that is coming on-chip to not toggle randomly while the scan chain is active.

The scan chain is implemented with a simple Perl-based script called deperlify to make the scan chain easily reconfigurable (a copy is included). A single configuration file generates a synthesizble scan block (for on-chip) and a testbench to test it, which allows rapid changes with minimal errors. The testbench has a number of tasks to easily access the on-chip structures.