Welcome to The NEO430 Processor project!

You need a small but still powerful, customizable and microcontroller-like processor system for your next FPGA project? Then the NEO430 is the right choice for you.

This processor is based on the Texas Instruments MSP430(TM) ISA and provides compatibility with the original instruction set (see differences below). The NEO430 is not an exact MSP430 clone – it is more like a complete new implementation from the bottom up. The processor features a very small outline, already implementing standard features like a timer, a watchdog, UART, TWI and SPI serial interfaces, general purpose IO ports, an internal bootloader and of course internal memory for program code and data. All of the implemented peripheral modules are optional – so if you do not need them, you can exclude them from synthesis to reduce the size of the system. Any additional modules, which make a more customized system, can be connected via a Wishbone-compatible bus interface or directly implemented within the processor. By this, you can built a system, that perfectly fits your needs.

It is up to you to use the NEO430 as stand-alone, configurable and extensible microcontroller, or to use it as controller within a more complex SoC design.

The high-level software development is based on the free TI msp430-gcc compiler tool chain. You can either use Windows (PowerShell or Linux Subsystem) or Linux as build environment for your applications – the project supports both worlds.

This project is intended to work "out of the box". Just synthesize the test setup from this project, upload it to your FPGA board of choice (the NEO430 uses a FPGA vendor-independent VHDL description) and start exploring the capabilities of the NEO430 processor. Application program generation works by executing a single "make" command. Jump to the "Let’s Get It Started" chapter in the NEO430 documentary, which provides a lot of guides and tutorials to make your first NEO430 setup run: 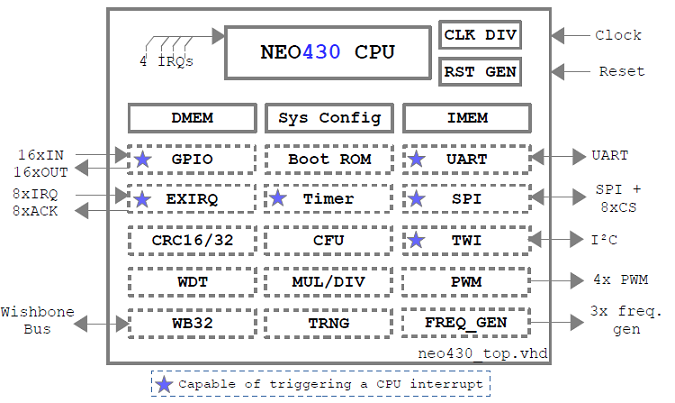 (optional modules are marked using dashed lines in the figure above)

Differences to the Original MSP430 Processors

Mapping results generated for HW version 0x0320. The full (default) hardware configuration includes all optional processor modules (excluding the CFU and the TRNG), an IMEM size of 4kB and a DMEM size of 2kB. The minimal configuration only includes the CPU and the GPIO module. Results generated with Xilinx Vivado 2017.3, Intel Quartus Prime Lite 17.1 and Lattice Radiant 1.1 (Synplify)

The following table shows the required resources for each module of the NEO430 processor system. Note that the provided numbers only represent a coarse overview as logic elements might be merged and optimized beyond module boundaries.

Mapping results generated for HW version 0x0320. The full (default) hardware configuration includes all optional processor modules (excluding the CFU but including the TRNG), an IMEM size of 4kB and a DMEM size of 2kB. Results were generated using Intel Quartus Prime Lite 17.1.

In contrast to most mainstream processors the NEO430 processor does not implement a pipelined instruction execution. Instead, a multi-cycle instruction execution scheme is used: Each single instruction is executed in a series of micro instructions requiring several clock cycles to complete. The main benefit of this execution style is the highly reduced logic overhead as no complex pipeline hazard detection and resolving logic is required making the NEO430 even sammler - at the cost of a reduced IPC (instructions per cycle). Also, the MSP430 ISA is not really compatible to the classic (e.g., DLX/MIPS) pipeline scheme due to its complex operand and adressing modes (e.g., ALU operations executing directly on memory data). However, this concept allows the processor to use very dense and powerfull CISC-like operations.

Furthermore, the multi-cycle architecture features a very short crtitical path when compared to other (even 32-bit) processors. Thus, the NEO430 can operate at very high frequencies even on low-cost (e.g., +120MHz on an Intel Cyclone 4) and low-power FPGAs (e.g., +20MHz on a Lattice iCE40 UltraPlus).

The coremark CPU benchmark was executed on the NEO430 and is available in the project's sw/example/coremark folder This benchmark tests the capabilities of the CPU itself rather than the functions provided by the whole system / SoC.

Even though a score of 6.38 can outnumber certain architectures and configurations (see the score table on the coremark homepage), the relative score of 0.064 coremarks per second might pretty low. But you have to keep in mind that benchmark was executed using only the resources of the CPU itself. The CPU consists of only ~500 Intel Cyclone IV LUTs and does not contain any sophisticated ALU operations like multiplication or barrel shifting. Also, all instructions are executed in a multi-cycle scheme requiring several clock cycles to complete. When explicitly using the NEO430 MULDIV unit for performing the matrix-operations benchmark scenario (among other operations, it is based on matrix-scalar, matrix-vector and matrix-matrix multiplications) the coremark score is increased to 12.56. By using additional HW accelerators from the NEO430 ecosystem (like the CRC unit) or by using the MULDIV unit also for address and index computations the performance and thus, the coremark score can be further increased 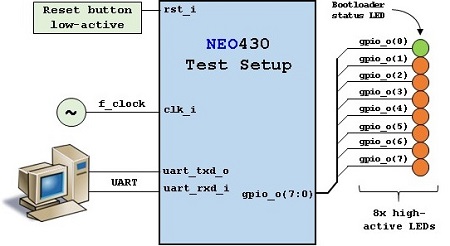 If you have any questions, bug reports, ideas or if you are facing problems with the NEO430, open a new issue or directly drop me a line. Also, I'm always happy to hear what cool projects people are realizing with this core :smiley:

If you are using the NEO430 for some kind of publication, please cite it as follows:

This is a hobby project released under the LGPL-3.0 license. No copyright infringement intended.

This project is not affiliated with or endorsed by the Open Source Initiative (https://www.oshwa.org / https://opensource.org).

This source file may be used and distributed without restriction provided that this copyright statement is not removed from the file and that any derivative work contains the original copyright notice and the associated disclaimer.

This source file is free software; you can redistribute it and/or modify it under the terms of the GNU Lesser General Public License as published by the Free Software Foundation, either version 3 of the License, or (at your option) any later version.

This source is distributed in the hope that it will be useful, but WITHOUT ANY WARRANTY; without even the implied warranty of MERCHANTABILITY or FITNESS FOR A PARTICULAR PURPOSE. See the GNU Lesser General Public License for more details.

You should have received a copy of the GNU Lesser General Public License along with this source; if not, download it from https://www.gnu.org/licenses/lgpl-3.0.en.html

"Windows" is a trademark of Microsoft Corporation.

"Virtex", "Artix" and "Vivado" are trademarks of Xilinx Inc.

"Cyclone", "Quartus" and "Avalon Bus" are trademarks of Intel Corporation.

Made with :beer: in Hannover, Germany.