This "clean room" CPU core is implemented in VHDL with either a two or three-stage pipeline. It is running at 25 MHz on a Xilinx FPGA and also verified on an Altera FPGA.

The Plasma CPU along with the Plasma RTOS and TCP/IP protocol stack are now running a live Web Server on a Xilinx FPGA. 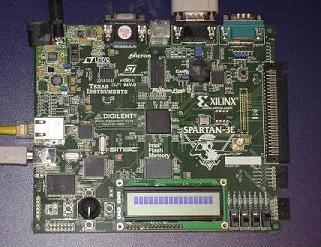 The CPU is implemented with a two or three stage pipeline with an additional optional stage for memory read and writes. (Using the three stage pipeline enables "pipeline.vhd" which delays some control signals into the next stage.) An ADD instruction would take the following steps:

1. The "pc_next" entity passes the program counter (PC) to the "mem_ctrl" entity which fetches the opcode from memory.

2. The memory returns the opcode.

3. "Mem_ctrl" passes the opcode to the "control" entity.
4. "Control" converts the 32-bit opcode to a 60-bit VLWI opcode and sends control signals to the other entities.
5. Based on the rs_index and rt_index control signals, "reg_bank" sends the 32-bit reg_source and reg_target to "bus_mux".

10. Read or write memory if needed.

The Opencores Subversion web page can create the 130KB plasma_latest.tar.gz file containing all the latest code.

The MIPS(tm) GCC ELF compiler for Windows is available gccmips_elf.zip (2.4MB). The OpenCores server wouldn't let me save zip files so I had to rename it with an '.odt' extention. Rename the file from gccmips_elf.odt to gccmips_elf.zip before unzipping the files into the trunk\gccmips_elf directory. Add this directory to your executable PATH environment: set path=%PATH%;YOUR_DIR\trunk\gccmips_elf

If you use Windows and don't have a Microsoft C compiler for Windows, you will need pre-compiled versions of the tools (rename as tools.zip) which should be placed in the tools directory.

You may also need a Windows version of gmake. Rename the file gmake_zip.odt to gmake.zip before unzipping.

See the tabs at the top for additional build instructions:

The implementation is based on information found in: The MIPS I(TM) instruction set can be found by:

The CPU core operates in Big Endian mode by default. To operate in Little Endian mode, change "little_endian" from "00" to "11" in the file mem_ctrl.vhd.

All signals are active high. Here are the signals for writing a character to address 0xffff when using a two stage pipeline:

The CPU core was synthesized for several different FPGAs:

The Plasma CPU project has been placed into the public domain by its original author and is free for commercial and non-commercial use.

This section describes how to avoid the two main limitations of the Plasma CPU core. The first limitation is that unaligned load and store operations are not supported since they were patented. This means that when loading or storing 32-bit values the memory address must be on a 32-bit aligned address. [The patent for the unaligned memory access instructions expired Dec 23, 2006.]

The second main limitation of the Plasma CPU is that exceptions (BREAK and SYSCALL opcodes) must not be placed immediately after a branch instruction (in the branch delay slot). The main uses for exceptions are software interrupts for debugger support and calling operating system calls.

Several groups have published how they have used the Plasma CPU.